On October 12, I had the pleasure of finally meeting my favorite mortician, Caitlin Doughty. It was a signing for her second published work, From Here to Eternity: Travelling the World to Find the Good Death hosted by distinguished D.C. bookstore Politics and Prose. The same humor and charisma that makes Doughty’s “Ask a Mortician” YouTube series so successful lends itself well to writing and book promotion, delighting her audience and readers. When I first covered Doughty in an interview and book review in 2014, I called her a death geek to highlight her relevance to our site. Now it’s increasingly clear that no stretch of the imagination is needed to show that the good death movement and feminist movement are intertwined. END_OF_DOCUMENT_TOKEN_TO_BE_REPLACED

Powerful and timely, The Hate U Give by Angie Thomas well deserves its long-held spot at the top of the New York Times Young Adult Bestseller list. If you read only one book this year, it ought to be this one. Thomas masterfully combines social justice and talented story-telling in this novel about teenage Starr Carter who witnesses her best friend being shot to death by the police. Not only does the novel examine major problems that affect people of color like police brutality, but it also explores smaller, more insidious ones like microaggressions and cultural appropriation. Every character is so multi-faceted and believable, you will find yourself caring deeply about them and what they are going through. END_OF_DOCUMENT_TOKEN_TO_BE_REPLACED

If you are a feminist and haven’t been reading Adichie, it’s time to head to the library. Between her writings, TED Talks, and being featured in a Beyoncé song, Nigerian author Chimamanda Ngozi Adichie is steadily becoming a household name in the international feminist scene. After reading her novel Americanah for book club, I decided to check out some of her works that deal more directly with her ideas on feminism. Today I will review her most recent publication: the epistolary essay Dear Ijeawele, or a Feminist Manifesto in Fifteen Suggestions, originally written as a letter to her friend with advice on how to raise a feminist daughter. END_OF_DOCUMENT_TOKEN_TO_BE_REPLACED 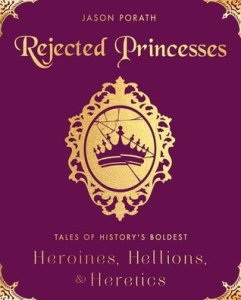 If you are a feminist on the internet, there is a good chance you have already stumbled across Jason Porath’s website, Rejected Princesses, in which he pairs gorgeous illustrations with short descriptions including legends, history, and fun facts about women who don’t fit the classic princess archetype. One hundred of those entries have now been printed in physical book form, and it’s definitely worth getting, even if you have already seen the blog. END_OF_DOCUMENT_TOKEN_TO_BE_REPLACED

Whether you want to bring some book-lovin’ to your Halloween or some Halloween to your book-lovin’, you’ve come to the right spot! I’ve compiled a list of the spookiest books I’ve read lately, be they legitimately scary or merely thematically appropriate. Check out these titles if you want to set the tone for this year’s spooky season: END_OF_DOCUMENT_TOKEN_TO_BE_REPLACED

Continuing with the theme of Sci-fi Summer, I thought I would tell you all a bit about the second book I completed for my reading challenge. Empire in Black and Gold, the first installment of the Shadows of the Apt series by Adrian Tchaikovsky, is really more of a high-fantasy work with sci-fi elements, including steampunk and military sci-fi. Instead of elves and orcs, you have various Peoples with insect-inspired traits, powers, and strengths. The Wasps, for example, can fly and produce stinging fire from their hands, and are an aggressive and military people. They are poised to take over the Lowlands, and only the old Beetle Stenwald Maker and his young protégés see the threat. Can they open the eyes of the Lowland leaders and stop the invasion before it’s too late? You’ll have to read the series and see. END_OF_DOCUMENT_TOKEN_TO_BE_REPLACED

So you loved Hunger Games and Divergent–what’s next? How about checking out some of the classics and major players of the dystopia genre? In honor of the Sci-Fi Summer Reading Challenge I joined earlier this month, I figured I would delve into one of my favorite sci-fi subgenres. These first five are what I would consider the classics of dystopian literature, and the last two are some early dystopian YA works that stuck with me through the years. If the end of the world, totalitarian governments, and utopian societies gone wrong are your jam, you’ll definitely want to pick up some of these.  Read down to the bottom to see how I’m doing on my reading challenge.  END_OF_DOCUMENT_TOKEN_TO_BE_REPLACED

You’ve heard the phrase “well-behaved women seldom make history.” Well sometimes, even ill-behaved ones who did make history don’t get their due. Have you ever heard of Mary Surratt? She is considered to be the first woman ever executed by the U.S. government, for the crime of abetting John Wilkes Booth in the assassination of President Lincoln.  Despite her claim to fame, her name has faded into obscurity. That is, until Susan Higginbotham decided to write a novel about her role in that infamous affair. END_OF_DOCUMENT_TOKEN_TO_BE_REPLACED

The Virginia Kingdom Chronicles, Book 1: The Crown is a royal court intrigue meets dystopian action story. It’s like Game of Thrones and Hunger Games had a baby. We here at The Daily Geekette recently received a copy for review from the author L.L. Livesey, and I have to say I thoroughly enjoyed reading it. What if post-apocalyptic America devolved into several districts ruled by Prime Governors? And then they threw off all pretenses of democracy and declared themselves kings and queens? That is the world Elise Koning grew up in, groomed to take over the kingdom of Virginia after her grandmother. But with the privilege of being heir to one of the most powerful districts on the continent comes danger as well. END_OF_DOCUMENT_TOKEN_TO_BE_REPLACED

City of Fae by New Adult author Pippa DaCosta is not your average urban fairytale. While it does take place in London (or, at times, under it), and it does involve a smoking hot fae rockstar, it doesn’t quite follow your typical paranormal romance formula. You see, down-on-her luck reporter Alina O’Connor has a secret so dark even she doesn’t know it. Life as she knows it comes to an end when she accidently breaks the Trinity Rules by touching deviant rock star Sovereign in the subway station. Or is it just beginning? END_OF_DOCUMENT_TOKEN_TO_BE_REPLACED