Integrity, loyalty, empathy, compassion. These are some of the moral components of lessons learned throughout Harry Potter. The novels have taught their readers lessons in being good people, in standing up for what they believe in, for fighting for what is right and raising your voice to do so. That is why when J.K. Rowling did not raise her own voice in light of the casting within the Fantastic Beasts and Where to Find Them films, something seemed off. 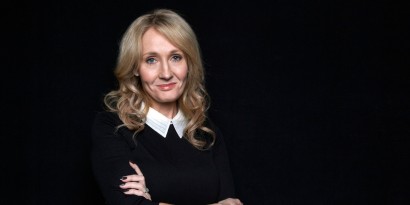 J.K. Rowling is a fantastic writer and has been a triumphant voice against hatred, in favor of feminism and equality. However, her support of Johnny Depp as Gellert Grindelwald makes her commitment to those beliefs questionable.

END_OF_DOCUMENT_TOKEN_TO_BE_REPLACED

Happy Father’s Day from the Daily Geekette staff! This year, in honor of fathers everywhere, we’d like to share with you some of our favorite celebrity father/daughter duos. These are the fathers who have raised incredibly talented, beautiful, and confident women. Musicians, actresses, ambassadors, and more: Daily Geekette predicts these women will surpass their famous fathers if they haven’t done so already.

END_OF_DOCUMENT_TOKEN_TO_BE_REPLACED

Costuming is a silent, visual and psychological force when you’re watching something, be it in a movie, a  television show or on stage at a theatre. Along with the other technical aspects of a production, costuming is a necessary, integral part of a person’s viewing experience, as it helps do things like set the time period, location and mood of whatever it is you’re watching. Costumes can also give the viewer clues as to who the characters are, what their occupations may be, and can even influence how we feel toward certain characters, depending upon color, fabric and garment choices.

Below are some of my favorite films not only because I love the stories themselves, but because I also really admire the work that went into their costume design!

END_OF_DOCUMENT_TOKEN_TO_BE_REPLACED

Musical and movie fans rejoice, the full trailer for Into The Woods has finally landed onto the internet!

END_OF_DOCUMENT_TOKEN_TO_BE_REPLACED

Back in 2004, director Marc Forster came out with the movie Finding Neverland, a family film starring Johnny Depp –for once not playing a slightly nuts, kind of unapproachably weird being –as J.M. Barrie, the playwright. Barrie wrote the world famous play Peter Pan, the story of the boy who wouldn’t grow up, and the story has been the epitome of childhood freedom ever since.

Finding Neverland was a film dictating the story behind this magical adventure. It captured J.M. Barrie’s life at the time he was writing this play. It was a beautiful, bittersweet movie, full of Peter and his adventures’ roots in Barrie’s reality. After its release, the movie was deemed good, people watched it, many viewers enjoyed it, and it fell out of sight as one of those movies that you watch for a trip down Nostalgia Road. It seemed that the movie would not resurface. 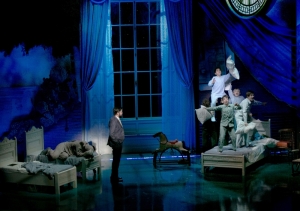 And then it did. It rose from the sea of stories and tales with Diane Paulus at the helm, and from that moment not even unhappy thoughts could keep it from flying. Finding Neverland has resurfaced as a musical at the American Repertory Theater in Cambridge, MA, under the direction of Diane Paulus, who previously directed the Tony winner Pippin, and is the resident director at the A.R.T. This production stars Jeremy Jordan (Newsies) as the playwright James M. Barrie, who finds his creativity again with the help of Ms. Sylvia Lewellyn-Davies (played to perfection by the lovely Laura Michelle Kelly) and her four sons: George, Peter, Jack, and Michael.

END_OF_DOCUMENT_TOKEN_TO_BE_REPLACED

Kevin Smith films have been a strong influence on my life as a pop culture fan since I was in seventh grade. I could waste a lot of this opening paragraph telling you anecdotes, so allow me to sum it up thusly.  The two greatest moments of my nerd life were being able to see Clerks 2 in theaters, and seeing Kevin Smith speak live in a Q&A . Meanwhile, one of my greatest shames is that I haven’t seen  much of his latest works. And now I’m about to add one more film to my “OMG MUST SEE” List: the just-announced Yoga Hosers.

Most headlines are emphasizing the team-up of Smith and Hollywood rock star Johnny Depp. That’s not what’s got me holding back the urge to fangirl as I type, readers. It’s the fact that Yoga Hosers is being touted as an action/adventure “comic-book movie” and both Depp and Smith’s daughters are in the leading roles.

Lily-Rose Depp and Harley Quinn Smith (yes, named after THAT Harley) will take to the big screen as Colleen Collette and Colleen McKenzie in K. Smith’s follow-up to Tusk. The two made a brief appearance in the horror-comedy, but now they’re moving to the forefront. Yoga Hosers is the second installment of Kevin Smith’s True North trilogy, which features “movies…steeped in Canadian myths and culture”. Considering the success of his Jersey-based films and his self-proclaimed love for Timbits, my only surprise is that it took Mr. Smith this long to put out a cinematic ode to Canada.

END_OF_DOCUMENT_TOKEN_TO_BE_REPLACED

If you’ve been following DG the past couple of months, you’ll know we’re all excited and slightly nervous about Disney/Rob Marshall’s Into The Woods movie. It either could be one of the most stunning musical-to-screen adaptations to ever grace the world of cinema, or it could be a train-wreck from hell. But with this recently released trailer and some stills, I think the majority of us now have a positive outlook on this upcoming release.

END_OF_DOCUMENT_TOKEN_TO_BE_REPLACED 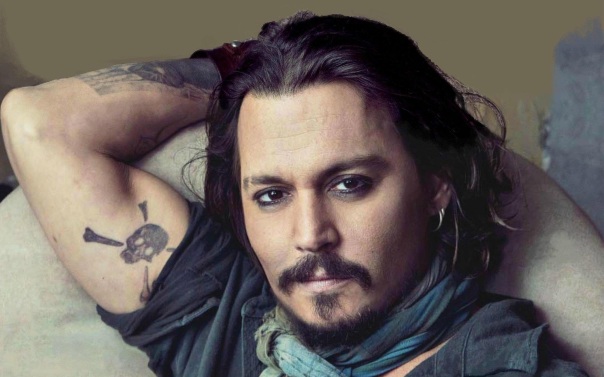 The latest Kevin Smith movie, Tusk, is a horror flick based very loosely on The Walrus and the Carpenter. It’s also related to a Gumtree advertisement in which a home owner offered free housing for a tenant willing to dress in a walrus suit. The ad turned out to be a joke posted by poet Chris Parkinson, a fan of Smith hoping to get the director’s attention, who was later made a producer for the movie.

The film follows the warped fetish of Howard Howe, played by Michael Parks, who sews victims into a walrus suit. Justin Long will play Wallace Brighton, a reporter and podcaster who becomes Howe’s victim when he visits in an attempt to interview the isolated fisherman. Haley Joel Osment and Genesis Rodriguez will also appear as Brighton’s podcast cohost and girlfriend. Smith’s screenplay also included the role of Guy LaPointe, a French Canadian cop. The role was originally offered to Quentin Tarantino, who turned it down. END_OF_DOCUMENT_TOKEN_TO_BE_REPLACED