Last weekend, John Lewis announced that he would be missing the 2017 inauguration, the first he would miss in thirty years.  This comment incited controversy.  One of the articles that came up told me that Lewis’s books were selling out in stores across the country, and I was reminded that I still had not read the third volume of Lewis’s comic book trilogy, which was co-written by Andrew Aydin and illustrated by Nate Powell.  I immediately went to the store and purchased a beautiful boxed set of all three books.  March is John Lewis’s story during the Civil Rights Movement.  Hopefully, you can read this article without needing to be warned about spoilers.

March Vol. 1 starts with Lewis getting ready to attend President Obama’s inauguration and flashes back to his childhood up through his initial involvement with the Civil Rights Movement.  Volume 2 continues in this style, and Volume 3 wraps it up.

Here’s the part where I review the trilogy:  It’s amazing.  Seriously.   END_OF_DOCUMENT_TOKEN_TO_BE_REPLACED 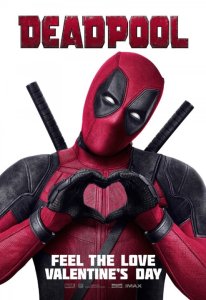 When rumors started going around that Deadpool was finally getting his own movie, people were skeptical. Could this be a good movie? Would they rate it R? Would Deadpool break the fourth wall? Would there be chimichangas? Could Ryan Reynolds pull it off? Then a clip “leaked.” The clip reassured fans that yes, Ryan Reynolds could pull this off. With the red band trailer came assurances that this would 100% be an R rated movie. The Christmas trailer dropped a chimichanga reference. All that was left was for Deadpool to break the fourth wall, and for this to actually be a quality movie. Guess what, Deadpool fans? They did it!

END_OF_DOCUMENT_TOKEN_TO_BE_REPLACED

With an ear-and-eye—catching title, and cover art reminiscent of a bygone era’s pulp fiction mag,  Bitch Planet starts out the gate running and doesn’t quit. Additionally, one co-creator and writer has the likes of Marvel’s most recent version of Carol Danvers scrapping the honorific Ms. for Captain under her belt. 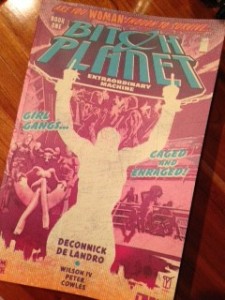 Kelly Sue DeConnick (notably of Pretty Deadly, in addition to Captain Marvel) is at the helm of this graphic novel, alongside co-creator and artist Valentine De Landro (cover art and ink for issues 1-2; 4) who provides gritty and beautifully-drawn works upon which readers may feast their eyes.

(This is a largely spoiler-free review.)

END_OF_DOCUMENT_TOKEN_TO_BE_REPLACED

On Wednesday August 8th, Invader Zim graced the racks of our local comic book shops. It was a great day to be a Zim fan. END_OF_DOCUMENT_TOKEN_TO_BE_REPLACED