Ah yes, Cannon Films. A company known for their less-than-professional looking work, and for being the “pioneers” of 80’s cheese. Nothing showcases their lack of expertise more than their Movie Tales series, which were cheap film productions of fairy tales made with a “big” star in the cast and not much else. Oh, and let’s not forget, they were also () musicals! Insert all of the sarcastic confetti here, please.

If you couldn’t guess what this is all leading to, today’s Tale as Old as Time Rewind will be about the 1987 Cannon Films version of Beauty and the Beast – and it has more cheese than a cheddar fondue. So turn on your smoke machines and grab all your biggest feathered hats – let’s take a look at this bit of 80’s insanity.

Like the 1976 version, Cannon’s movie uses a pretty traditional take on the plot. Beauty’s family consists of multiple siblings, her father steals a rose as a present, Beauty then has to take her father’s place, yada yada – you know the drill. But this is one of the handful of versions of BatB that actually has a pretty key element that most interpretations tend to skip over – Beauty meeting The Prince in her dreams. She of course doesn’t seem to make any sort of connection that the Beast and the Prince are the same person – but with them both having the fashion sense of a poor-man’s Liberace, I don’t see how she couldn’t make the connection.

How Beauty falls for this guy (with that hat) I’ll never know. But considering how this incarnation of our heroine is less intellectual and headstrong than other adaptations, it doesn’t surprise me that her level of taste isn’t up to the typical standard. And considering that everyone in this movie has costumes that look like they’re rented from the sweatiest of “Garb” stores, maybe this Prince’s attire is the height of fashion according to Beauty.

If you can’t tell, Cannon’s Movie Tales aren’t exactly the most quality films to exist within the legacy of filmmaking. Many of these movies were a product of their time, but with a budget that was just a step below your community theater’s holiday showcase. They also tried to appeal to their current audiences, without making an all out pop culture reference. This results in moments that will lead even the youngest of children to face palm, including a scene where statues come to life…. and begin to awkwardly breakdance. The Beast’s face below is a pretty accurate rendition of my face while trying to watch this. 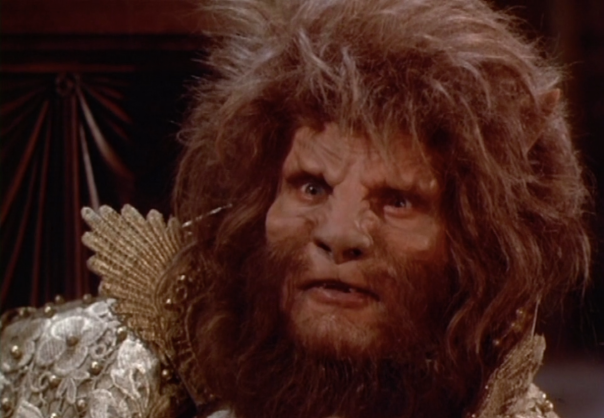 To add to the failure of this movie, everyone in the cast doesn’t seem to know exactly what kind of movie they’re in. Many of the sibling characters seem to think they’re all part of a SNL produced sketch, while our leads are stuck at a divide. Rebecca De Mornay as Beauty seems to think she’s still in Risky Business mode (yes, she’s that girl from that movie) meaning that she makes every line sound like rejected dialog from a porno.  John Savage, on the other hand, seems to think he’s in a horror movie, making too many dramatic grunts and faces that he hopes will frighten the audience – but just comes off painfully silly.

All of these “interesting” acting choices can result in quite a fun drinking game, for those looking for such an activity. If you decide to partake, may I suggest you make sure to include “Every Time Beast Makes A Creepy Noise” to the list, for it’ll likely get you at least tipsy by the 30 minute mark.

The most cringeworthy aspect of Cannon’s Beauty and the Beast isn’t the god awful acting and direction, but rather the music that plays throughout. Starting with an annoying tune that Beauty and her siblings sing to each other about Beauty being the saving grace of their family, you begin to realize that De Mornay can’t really sing. This makes things even more comical when other songs, including the big love ballad number, might suggest that De Mornay has pipes. Instead she continues to breathlessly scream in tune. Savage has an okay voice, but often tries too hard to sound like an Opera trained performer, and instead comes off like a cheap lounge performer.

Between the cheap costumes and questionable acting, you can tell that this Beauty and the Beast is not exactly a true classic. But what is the most entertaining part about it? Well, it was born to become a RiffTrax episode, plain and simple. If you add all of the above mentioned mishaps, plus the absolutely incredible eye expressions throughout, you have pure comedic bad movie gold. So thanks, Cannon – you delivered the only truly laugh-out-loud funny version of this fairy tale from start to exhausting finish.

Sure, many will say that nostalgia is what keeps this version a favorite of theirs. They’ll scream “But it’s for kids! They’ll watch anything!” and though that can be true in some instances, don’t you think all kids (from the 80’s or even now) are smarter and deserve better entertainment than this junk? I tend to think so, and as much as Cannon Films might have said otherwise back in the 80’s, if Disney (and even other family companies that we’ll discuss later) can do better and smarter takes on this, then there’s no point in defending it.

So, what do you think of the Cannon Movie Tales Beauty and the Beast? Do you have happy memories of it from your childhood? Or would you rather not remember that it exists? Comment below about this trip down memory lane. And make sure to tune in next week, as we’ll take a look at an unconventional adaptation, featuring Hello Kitty! See ya then.