On Saturday, January 21, 2017, over 2.9 million people participated in the Women’s March worldwide.  6 writers for Daily Geekette were present in four different cities on the east coast.  From pussycat hats and speeches to feminist icons and nerdy protest signs, read about our different Women’s March experiences.

The nerds were out in force in New York City for the Big Apple’s own branch of the Women’s March. One of the most popular figures to appear on the signs held by marchers was Carrie Fisher as Princess Leia in Star Wars. From puns, such as “Don’t Leia hand on my healthcare,” to the popular meme stating “A woman’s place is in the resistance,” all types of slogans accompanied Leia’s image. What better icon to rally around than the woman who was both Disney princess and war-hardened general?

January 21, 2017 will be a day long remembered as the day women around the world showed their solidarity. My experience on this historic day started at the Princeton train station where I received a hug from a complete stranger. I saw women and men decked out in purple, with their pussy hats and toting signs to express all of our united hopes and fears. We were surprised and pleased to meet friends and neighbors on that train. We were at Patriot Theatre War Memorial in Trenton, New Jersey and the organizer Elizabeth Meyer spoke first. Her words brought tears to my eyes, because our election night experiences were identical; the polls came in I experienced true and utter denial and then fear for my daughters. Ms. Meyer said this was her driving force to organize the New Jersey march. It was a very emotional day that included many speeches, people just sharing stories and in the end a hope that we can keep this going, because this movement cannot end with this march. This march must be just the beginning. We as a a nation must be vigilant. That is what I took away from this historic day.

In defiance of recent xenophobic rhetoric that has been plaguing America and the world, I opened my home to strangers, hosting three lovely young women who had traveled all the way from Boston to attend the march in D.C. From the moment I picked them up at the metro station and all through the day of the march, we received supportive comments from people we met on the street, many of them thanking us for standing up against hate. When we walked out the door on Saturday, almost everyone on the street was wearing a pink, cat-eared hat and on their way down town. The feelings of solidarity and power and force of sheer numbers that I felt during the march will bolster me during the next four years. We are not alone. We matter. And we will protect ourselves and each other.

I feel like as much as I wish I could have made it to Washington D.C., I’m so glad that I stayed local and marched in Boston because got to hear my senator speak (I am short and was too far away to actually see her).  Elizabeth Warren, our country’s voice of political logic, was one of several speakers in Boston, and she brought hundreds of thousands of people together with her beautiful words.  One refrain repeated throughout the day that struck me was the need for belief in science.  I don’t think I realized until Saturday that believing in science was a choice for certain people.  Massachusetts is at the frontline of the war on injustice, and it was so reassuring to hear Boston’s mayor, Marty Walsh, as well as Senator Warren, state that Massachusetts is never going to give up the equality we’ve worked so hard to achieve.

At Daily Geekette, we know that the Women’s March is only the beginning, and we have a long way to go to fight for the equality everyone across the U.S. deserves.  Look forward to future articles that tie the current political issues with our geeky passions!

Here are some of our favorite nerdy signs from all over, but mostly from Boston: 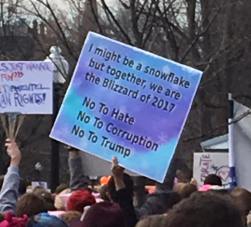 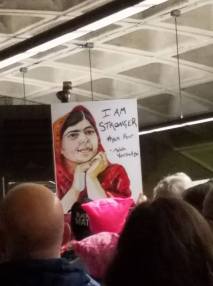 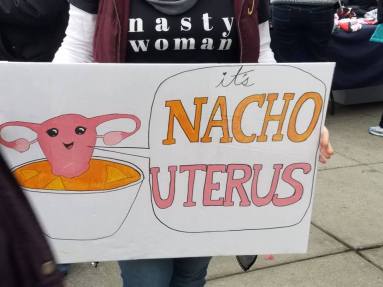