I’ve grown up with Star Wars in my life from the very beginning. I loved the dirty, worn and unglamorous world of Space Princesses, Farm Boys, Robots, and them all battling against the forces of evil. This repeat enjoyment has carried with me for decades, and has resulted in a love affair that has yet to die. And with last year’s The Force Awakens, I got to revisit that world in the most beautiful and magical of ways. But would the same feeling carry through in the latest Star Wars flick – a one-shot story called Rogue One? This was a concern that fell on me as the days drew closer to the film’s release. But luckily, that concern has dissolved completely.

Directed by Gareth Edwards –  Rogue One tells the story of Jyn Erso, the daughter of the future designer of the Death Star. As a child, her father (played by Mads Mikkelsen) is captured by the Empire, abandoning her through the majority of her life. As an adult, she is eventually taken in by the Rebellion and asked to help find her father’s whereabouts. This leads Jyn down a bumpy bath, where she bumps into familiar faces (Forest Whitaker) and many new ones (including Donnie Yen, Diego Luna, Riz Ahmed, Wen Jiang, and Alan Tudyk as K-2SO) and they form a team – the one that must get the plans to destroy The Death Star, and hopefully defeat the Empire (especially main baddie Krennic, played by Ben Mendelsohn) once and for all.

Being the first Star Wars Story film in the saga, Rogue One has some big shoes to fill and takes risks that no other film in the franchise has yet to do. The lack of an Opening Crawl, the dark tone, the focus on a certain kind of ending than what you’re used to – Star Wars is growing up in some ways, and remaining the same childlike entity in others. But the fact that this is a movie attempting to think outside of the box of its usual narrative, while also retaining the reasons why we love the franchise to begin with, is refreshing.

I will never be able to find a newer Star Wars film that tops many of the entries in the original trilogy for me. But there’s something about the things that worked in Rogue One that finds a way to be a perfect middle ground – having one foot in the past and one foot in the future. This goes with the overall atmosphere of Rogue One, but also references the technology used to make it – which will leave many dropping their jaw in a frequent motion throughout the film’s running time.

The dirt, grime and disappear of the Empire’s shadow over the Galaxy can be felt at times, but is also never brought to full effect (yes, Storm Troopers are just as silly as they’ve been since 1974). But Rogue One’s ability to feel organic in every frame is what trumps many of its flaws in the characterization department and the somewhat jumbled pacing (which is probably due in large part to the various reshoots that were publicly discussed over the last few months.) 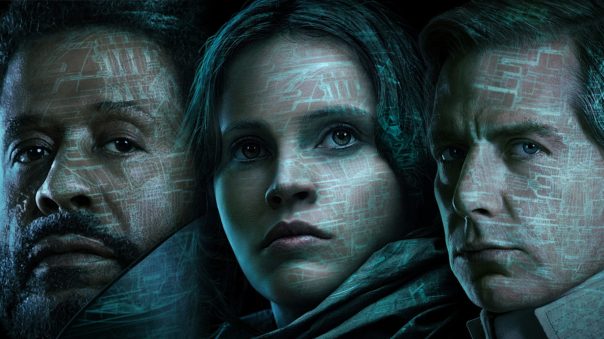 The same can be said for a majority of the performances by the cast in the film, who do as well as they can with a story that seems to have gone through many changes. Important mentions should be given to Donnie Yen as Chirrut Îmwe, who proves he’s a treasure outside of his generic Action comfort zone, hitting all the right beats with effortless ability. The same can be said for Alan Tudyk, who brings to life yet another memorable android for the franchise. And Diego Luna as Cassian Andor is too cool for this movie to even handle.

But the big stand out comes from the bad guy of the film. Yes, Ben Mendelsohn shows yet again that he is one of the most under appreciated actors in the business, and though the script might not give him the most menacing of moments, he leaves an impression of both villiany and ridiculous antics (sprinkled with sass) that gives all the ingredients needed for a great Star Wars antagonist.

Its a shame that other incredible talents (including Jones and Whitaker) seemed to have much of their performance left on the cutting room floor. Leaving us to wonder what was or could have been from them as a whole. But what was shown works fine, it just lacks anything that would scream extraordinary.

Ultimately, I would argue that many critics are missing the bigger picture – that unlike some Star Wars films (especially Force Awakens) this isn’t meant to be a character study, but rather a focus on something much larger – the war itself. How it leaves the greatest of heroes voiceless in its wake. And it is a truth, Fantasy Sci-Fi battles or in Non-Movie ones, that never should be disrespected.

Rogue One is not a perfect film by any means, but for the advancements it makes in the history of Star Wars as a brand and within the saga’s timeline itself, it is important and should be thought of as such. And here’s hoping that the Young Han Solo project and Episode 8 leave us with the same sort of energy and excitement as Rogue One has. Because like Jyn Erso says, “Rebellions (or big franchise films, in this case) are built on hope.”