For the past couple of years, you might have been hearing about a little movie called Passengers. Filled with drama on and off the camera in every corner, this new Sci-Fi Action/Romance has been the talk of Hollywood since the day it was mentioned. But with stars Chris Pratt and Jennifer Lawrence (who fought to get a paycheck that doubles that of her co-stars), Passengers has a lot to live up to, and the first trailer for the film certainly adds more fuel to that flame. 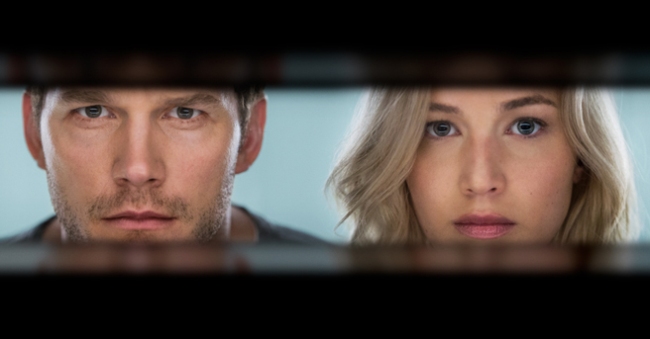 We begin with some elements that are typical to a romantic comedy, almost hitting that sweet spot of Tom Hanks/Meg Ryan realness with a splash of some Fifth Element for good measure. But once we get the generic cute introductions out of the way, we learn the nitty gritty of the story.

For those who have no clue about Passengers, it tells the tale of two people who are on a 100-year space mission to a new planet. The problem is that during said travel, they (like their fellow passengers) are supposed to be asleep, and our two future lovebirds have woken up with 90 years left to go on their trip. Why did they wake up? Are they a part of a bigger plan? All these mysteries, plus how they’re going to rescue their friends and family upon the ship, is what the majority of Passengers seems to be about.

From the get-go, this film seems to have some fantastic visuals. The ship design is especially inventive. Mixing a bit of H.R. Giger’s work from Alien, along with some new inventive choices, the design team on this movie isn’t skipping over any detail.

I’m also pleased to see that (at least based on the trailer) the romantic elements between the two characters won’t be too ridiculous, and the balance of the rom-com and the action aspects will be well played here.

Jennifer Lawrence is not exactly an actress I’ve been a fan of recently, but maybe this will be the movie that gets her fan base returning after her dismal performance in X-Men: Apocalypse. On the other hand, Chris Pratt looks like he’s bringing on his A-Game here (as usual), and in a slightly more serious tone than we’re used to seeing him. I hope that these two have as much chemistry as many of us are dreaming of – a element that could make the movie crash and burn if they aren’t a cinematic match.

And finally – a brief fangirl moment, if you’ll allow me – MICHAEL SHEEN IS IN THIS MOVIE!? AS A ROBOT THAT WORKS AT A BAR?! Can we say brilliant casting? I think so.

With all said and done, Passengers is looking to be one of the year’s best – or at least the most interesting. Between this, A Monster Calls, and Arrival, Oscar season 2016 – 17 is looking incredibly interesting in the science fiction department, and so are the box office possibilities.

What do you think of the first trailer for Passengers? Are you a fan? Have you been following since the beginning? Are you pumped to see Michael Sheen get more big screen work? Comment below with all your thoughts!