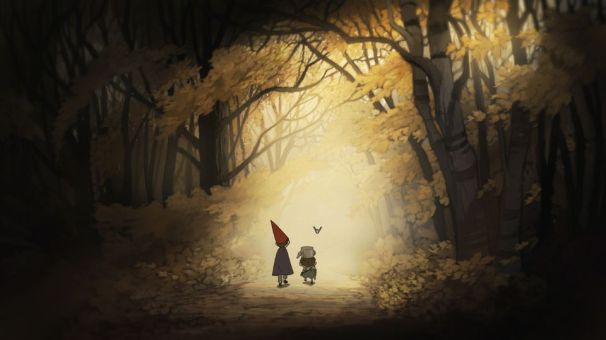 A promotional image for Over The Garden Wall

If the names Anderson and Grimm ring a bell, you probably already know that their stories were cautionary tales detailing the most creative of punishments for disobedience. However, with the ever growing popularity of everything Disney, it’s hard to remember fairy tales being anything but happy. Today’s post seeks to amend this by drawing attention to three works that manage to find beauty in both light and darkness.

While the dark may not be your cup of tea, it certainly makes for some interesting twists and turns along the way.

1) Over The Garden Wall Soundtrack 2.0

It was announced at this year’s San Diego Comic-Con that Over The Garden Wall would finally get the soundtrack it deserves – comprised of thirty-two instrumentals and songs – sometime in August. The Cartoon Network mini-series originally aired on November 3rd, 2014 and gained instant popularity with its unique blend of catchy tunes, precocious characters, and deceptively simple storytelling jam-packed in ten episodes. I, for one, was late to the game and only just got around to watching them. Needless to say, I was not disappointed. Creator Patrick McHale’s music perfectly captures the enchanting atmosphere of the Unknown and is guaranteed to stay with you for a long time.

Manga-turned-anime adaptions understandably have to make a few changes for the sake of time, but Princess Tutu definitely takes the cake for its complete narrative overhaul. This Magical Girl anime originally aired on August 16th, 2002 and manages to combine Swan Lake and The Little Mermaid among other stories in an equally tear-jerking masterpiece about being true to yourself. While this series may sport a cute exterior, its subplots are less than innocent and often border on Puella Magi Madoka Magica proportions. If you’re a fan of works that challenge the boundaries of their given genres, I’d recommend giving the adventures of the adorable Ahiru/Duck a try.

This upcoming graphic novel is a fast-paced retelling of the eponymous princess that knows exactly how to deliver its tale. In this version of Snow White, a young Samantha “Snow” White comes to odds with the unforgiving world of New York City after having lost her father to foul play. With Phelan’s gorgeous inking, the novel takes full advantage of it being a visual medium. When color does come into play, it pops off of the page and serves as the light to an otherwise dark story. While the cast doesn’t quite reach their full potential, this is something I attribute to the nature of the fairy tale. I was left wanting to know so much more about the Evil Stepmother and the Seven Dwarves – which isn’t necessarily a bad thing. Like any good comic, Snow White leaves several hints with which to formulate one’s own interpretation of the characters and their motives.

If you like a good retelling, be sure to pick up a copy on September 13th.

Which of these revamped fairy tales are you looking forward to exploring the most? Leave a comment in the section below!