In Real Life tells the story of two best friends, Nick and Hannah, who have been best friends since eighth grade, but never met in person. Now it’s spring break of their senior year, and Nick’s band is picked to play a concert at the House of Blues in Las Vegas, and Hannah decides to go on an impulsive road trip with her sister Grace and friend Lo, and surprise Nick at his concert. Things don’t quite go according to plan when it becomes clear that Nick has kept a couple things secret, and Hannah has to try and reconcile the Nick she has grown so close to, with the Nick right in front of her. 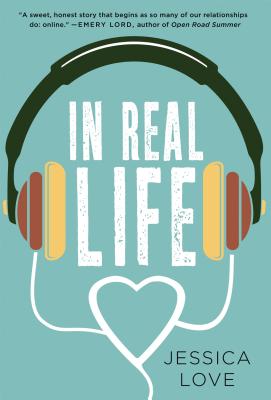 The story of In Real Life reminded me a lot of Jennifer E. Smith’s writing (think The Statistical Probability of Love at First Sight) in terms of structure, and teen romantic drama. There were certain predictable teen romance elements to the story, but there were also far more surprises and twists than I was expecting. The protagonist of In Real Life, Hannah Cho, is not perfect, and it’s her propensity for making poor decisions – or just outright running away from decisions – that makes her an engaging protagonist. Each time it seemed like a happy ending was in reach, Hannah would mess it up again, or something else would go wrong. Jessica Love managed to find a balance between creating more conflict for her characters, while also staying to true to how real people might react in a given situation. It also doesn’t hurt that, realistically for where the book is set (Southern California and Las Vegas), it is not a cast of all white characters: Hannah and her sister are Korean, and Hannah’s friend Lo is Mexican. While this shouldn’t feel revolutionary, the We Need Diverse Books movement proves otherwise.

In Real Life is not a literary masterpiece, but it isn’t trying to be. It is a sweet, teen love story, about two friends who have fallen in love with each other, but can’t quite figure out how to communicate that very well. While some readers might find it frustrating, I felt it made the characters seem more real. Lots of people don’t know how to communicate well, especially when it’s someone they really care about and don’t want to ruin a relationship with. I appreciated that In Real Life took the time to explore the challenges of communication in the context of a teen romance, especially one that starts with the premise of how easy it is to communicate with someone via technology, even if you live in different states. If you’re looking for a fun quick read for a Saturday afternoon, I would definitely recommend Jessica Love’s In Real Life.

In Real Life was released in hardcover by St. Martin’s Press on March 1st, 2016. You can purchase the book from IndieBound here, from Powell’s here, or request it from your local library!

This review was made possible by access to an advance ebook copy from Netgalley.