This summer, I had the opportunity to visit Toronto, Ontario and attend an exquisite little show at the Bata Shoe Museum that I had discovered whilst searching the web for my museum exhibits article from April. Despite the specific name of the museum, this beautifully-curated exhibit contained vast amounts of information and a darling selection of extant 19th-century garments, accessories, and related manufacturing equipment, in addition to, of course, a lovely and satisfying variety of shoes. 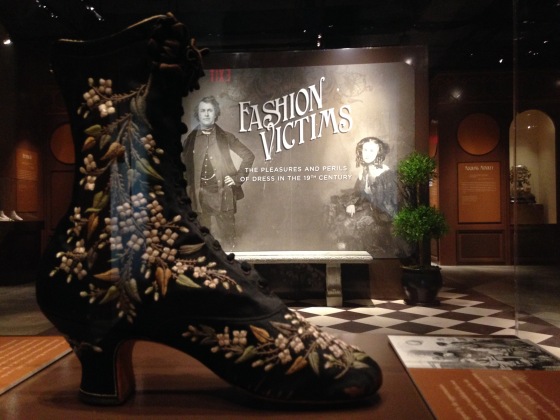 Fashion Victims: The Pleasures and Perils of Dress in the 19th Century is a gem of an exhibit that would interest not just lovers of footwear, but those who are fond of the strange, dark, dirty and tragic side of the 1800s.

One of the best  and initial points that Fashion Victims makes is that even though elite members of society presented a sleek, fashionable, luxurious and polished front, there were inherent dangers lurking behind the seams (and the scenes) when it came to what people wore and how it was manufactured.

Certain colors were made from toxic dyes, and other materials were steeped in harmful things like mercury. Some really beautiful greens were achieved by a noxious combination of copper and arsenic. Thus, the wearer not only experienced ill effects, but the individuals laboring to create these fashions especially suffered greatly at the desire of the trendsetting rich to appear en vogue.

Even dainty silk flowers were laced in the chemical element arsenic, and some vivid dyes were said to leave chemical burns upon the wearer. From crinoline fires to exploding celluloid factories (celluloid was a precursor to plastic, used in fashion to replicate tortoiseshell for hair combs and jewelry) and the appalling conditions that particularly women and children toiled under, Fashion Victims is a sobering but fascinating look back over the progress and jeopardy intrinsic during the late Neoclassic and Romantic eras through the Industrial Revolution.

This particular exhibit itself was the deciding factor in visiting the city, but my friends and I also built an exhausting but fulfilling museum-heavy itinerary around the Bata.  Even though we packed our four full days in Toronto with all sorts of culture, we barely even scratched the surface of what the city had to offer!

Fashion Victims: The Pleasures and Perils of Dress in the 19th Century runs through June 2016.

Have you visited the Bata Shoe Museum? Or is there a great exhibit you’d like to share with us? Go ahead and leave a comment below!