Theresa Buchheister is best known for joining the Pokemon crew in 2015. She is currently the voice director for the English dub of this highly popular series, though that is not her only claim to fame. She is an incredible person and an inspiring director. As an avid participant in theater, she has created her own theater company, in addition to being involved in many projects that would make the average person insanely jealous. Dalin and Kenny sat down and asked Theresa some of the burning questions we had on our minds… 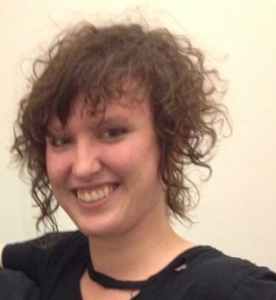 Q: What made you want to become a director?

A: Well, that is a thick question!  Part of it is natural inclination–I like making lists and decisions.  I enjoy approaching things that seem impossible and the heavy potential of failure. (Is that masochism?)  I prefer doing lots of things to doing one thing.  I like seeing the components of a whole over time, and making things work.

I also like making art with other people, as much as I enjoy my hobbies of drawing and writing, which are more solitary.Directing demands precision and collaboration, which is good for my brain.Working my first year in NY for Richard Foreman was the thing that shook everything up and then made me want to direct forever.

Q: What were you like growing up? Were you always interested in theater/directing?
A: I was always in drag/costume.  I wanted to be Mr. Tumnus, Sherlock Holmes and Buster Keaton, fashion-wise.  As a child,  I also loved using free time to make theater–I would spend recess trying to direct and star in Who Framed Roger Rabbit and Back to the Future in the school library.  (I really want to play every Christopher Llloyd role.)  I would stage plays in the basement of my grandparents’ house with my siblings and cousins based on the amazing stories my grandpa would tell us.  I did plays at church and in the yard and wherever I could.
In High School, I starting writing and directing, and was heavily influenced by the experimental theater program that the head of the university philosophy department had started many years before.  We learned about Stein and Foreman and Artaud and so many great artists and then learned how to collaborate.  This was followed by my time in college, where I got to write and act and direct and produce and assist great directors and build props…
I am incredibly different than I was as a child and yet pretty much the same.  My brother and I still hurt ourselves laughing at pratfalls and farts.

Q: What’s your favorite thing about Pokemon?
A: I love the sincerity combined with the humor and action.  It is so fulfilling.  Mostly, I love the reactions….  directing cartoons is so much about reacting and it is so wonderfully over the top and honest, at the same time.  It is often hilarious and slapstick, but with a great heart.

I also love the vast and deep internal logic.  I am a big fan of strategy games, so this appeals to a deep math nerd in me.

Q: What’s your favorite book and why?

I mean…. okay.  David Markson is by far my favorite novelist.  The Last Novel is a book I read every year.  Wittgenstein’s Mistress changed me.  Vanishing Point was the first one that I read and it sucked me in…  I love Ulysses in a sick devoted way.  I totally connected to Geek Love in a way that made me read it a few times over immediately, like painting the SF Bridge.  But I would also have to consider anything by Kathy Acker…  And I am an unabashed fan of Harry Potter.  I love J.K. Rowling.  I love the books.  I think that they are so important in the world of literature and media.  And I am hosting PotterCon trivia this year!

Q: If you were to write an article for The Daily Geekette, what would you write about?

A: I would need someone to reign me in.  I would love to write about diverse geek topics, as I have many…  I see lots of experimental theater, DIY shows…  I also love professional wrestling, D&D, comics, horror films, time travel, aliens, erotica, magic, science, makers…
I would love to do a “Geek Week” kind of article…what geek things of splendor hit my radar this week?

Q: What inspired you to want to get into the industry?

A: I started by loving cartoons…  then directing theater (in many ways like directing cartoons)…  then directing audio books…  And this opportunity seemed to be the most fortuitous thing possible.  I had no idea, growing up, that this was even a possible career.  I didn’t plan for it.  But it is the perfect fit and I am so grateful every day to get to do it.  The actors and I often pause mid session to acknowledge how lucky we are.

Q: Do you have a favorite voice actor, one you worked with or in general?

A: Well, that is impossible.  I work with a number of amazing folks every day.  Marc Thompson is sort of the most casually brilliant guy ever.  I feel silly asking, “Can you do this accent?”  Or, “Can you do this creature?”  Because he can do anything.  I really needn’t ask.

Q: Since you worked on WINX Club, are you at all a fan of the Magical Girl genre?

A: TOTALLY.  I love that they are strong, magical women, going to school, hopping time and space, kicking butt.  Working on Winx is so much fun and anything that wants to allow women to do everything (as should be natural, but is not common enough), gets my support.

Q: Do you have a favorite animated series of all time?

A: Series, not films…  I really connected to Looney Toons and Animaniacs, growing up.  And love ’em to this day.

Q:  If you could direct any actor, who would it be?

A: Catherine O’Hara.  Hands down.
Make sure to check out Theresa’s work on the latest season of Pokemon, airing on Cartoon Network (check local times for details), as well as Winx Club (available on Netflix and other streaming platforms) We at DG can’t wait to see what is on the horizon for Theresa! You go girl!
Advertisement

Follow The Daily Geekette on WordPress.com
Join 3,030 other subscribers